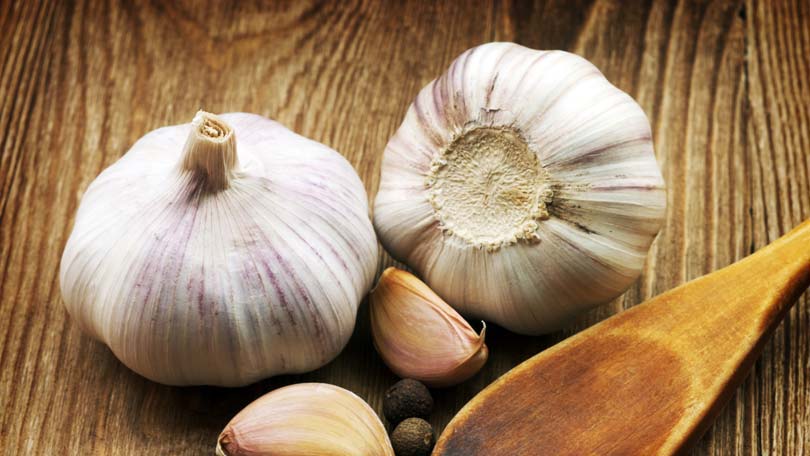 Garlic, or Allium sativum, is a perennial plant in the Alliaceae (or lily) family and is closely related to the onion. It has been regarded as an invaluable kitchen and medicinal plant for thousands of years, and is one of the most important seasoning agents most home cooks or chefs can keep at their fingertips. Garlic, which is native to central Asia, has been used for so long that it seems to be embedded in food history nearly from the start. It is mentioned in countless historical documents including the Old Testament of the Bible.

Garlic is made up of a multi-sectioned bulb covered by a thin, papery peel. The bulb, which in its entirety is referred to as the head, is made up of around a dozen smaller cloves, which can be separated and used individually. The peel must be removed before eating or preparing, though the fine skin underneath the papery outer layer can sometimes be left intact (see Roasted Garlic recipe, below).

Raw garlic is intensely pungent with a biting, almost spicy flavor which can seem to sting the mouth with its intensity; the flavor mellows considerably with cooking. Garlic has a reputation for its lingering odor, which comes from the plant’s sulfuric compounds. These compounds, once eaten, cannot be broken down during digestion and must be excreted through the skin, blood and lungs over the course of several hours, giving the plant a long lasting quality which some people love and others hate.

Garlic is used primarily as a seasoning; its flavor can support bland items or enhance more desirable ones. The cooking method and use of the cloves tend to dictate garlic’s intensity, but when prepared correctly it is almost inarguably delicious.

One of the several wild garlic varieties is no doubt the source of all cultivated garlic today. The wild varieties were most likely native to central Asia and parts of the Mediterranean. It has been used for thousands of years, as was a part of the diet in Ancient China, Rome, Greece, and Egypt; it was found in Egyptian tombs and may have been used in the ceremonial embalming process. The plant was also considered a super food by the Romans who believed it gave strength to athletes, workers, and soldiers (and some recent research may support parts of this claim), though much of this theory was rooted in magic rather than nutrition. Garlic did experience some backlash in certain upper-class sectors throughout history; the aristocracies of several cultures felt that reeking of garlic was a pedestrian practice best left to “commoners.” It was also warned that too much garlic in the diet would drive off potential lovers with its smell.

It’s true that garlic has a potent and pungent aroma which is released when the bulb and/or cloves are cut or bruised; a similar result occurs in onions. Lovers can easily prevent the dreaded rebuff of their partner by encouraging them to eat the cloves as well.

Garlic is most commonly associated with Mediterranean, Italian, French, and Asian cuisine, but in truth it seems to transcend cultural barriers and can be found in most kitchens across the globe. As a flavoring agent garlic works particularly well in sauces, which can subtly bring out it’s natural flavor while enhancing those of the dish it accompanies. Greek skorthalia and hummus, Italian pesto and aioli, Spanish or Cuban sofritos, and basic garlic-cream sauces are good examples. The seasoning also enhances the flavors of most meats including veal, beef, chicken, pork, and the like. Garlic works in nearly all savory dishes, and can give flavor to roasted or sautéed vegetables of all types. Bean dishes, soups, casseroles, egg dishes, and seasoning salts can also benefit from its use.

Garlic was viewed as a mystical and magical plant, and was used in superstitious practices from time to time – it is best known for the old belief that it keeps vampires away. More modern research is showing promise that garlic’s phytochemicals and sulfuric compounds have antioxidant properties, and may be able to treat inflammatory diseases like heart disease or cancer.

Fresh, whole garlic cloves are easily purchased at most grocery stores and super markets. Many supermarkets are now selling the peeled, skinned, separated cloves in ready-to-use containers as well. Whole garlic bulbs can be stored out of direct sunlight in a jar or pot for around one to two weeks. The cloves, once peeled, should be refrigerated.

Dehydrated and powdered garlic can also be purchased in most spice aisles under the name Garlic Powder. Though not nearly as good as the real thing, the powder can be used similarly – it’s best for flavoring liquid bases for sauces, or mixed with salt and other dried spices for rubs.

Roasted garlic is soft, creamy, and mellow in flavor – it is a wonderful spread for breads, but can also be added to oils, soups, or sauces for other uses.

Several whole bulbs of garlic
Olive oil
Preheat oven to 400 degrees.
Peel off papery outer layer of the garlic, leaving the clove skins intact
Using a sharp knife cut off around ¼ – ½ of an inch of the bulb’s top, leaving the clove tops exposed. Place in a baking pan and drizzle whole bulbs with olive oil, taking care to coat the exposed clove’s surface.
Cover pan with foil. Bake 30-35 minutes, or until cloves soften inside. Remove pan and let cool. Scoop out the garlic with a small spoon or knife. Spread directly on bread or mix with olive oil for dipping.