Home » Relationships » Marriage Advice » Are You Less than Average in the Bedroom? 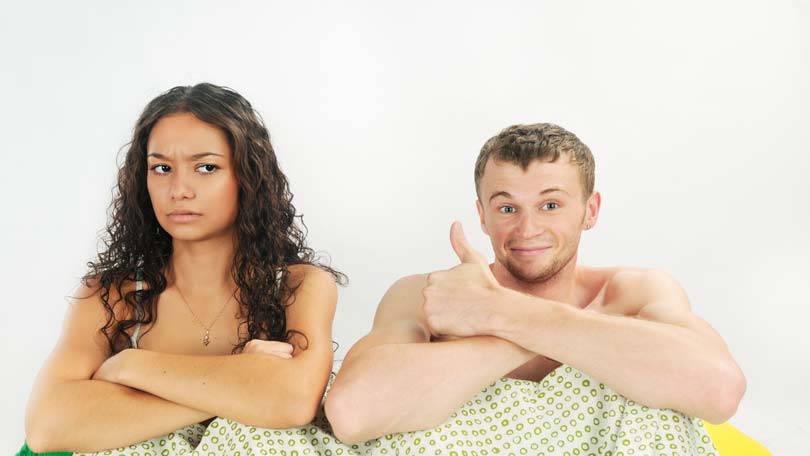 Are you good in bed?

From the time that people become sexually active, their ability in the bedroom fast becomes an object of insecurity. Sure, no one is really talking about whether their bedroom antics are up to par, half of all women are still faking orgasms and asking a partner, ‘Was that good for you,’ is often a loaded question that doesn’t get an honest answer. (Except of course in surveys) And boy, if you have read any of the recent surveys about sex and marriage the truth is you should feel insecure in your marital sexual relationship.

In fact, according to major sex surveys, such as the 2010 Durex sex survey most married couples don’t rate their sexual encounters with their spouse that high. A 2010 article in Marie Claire magazine also disclosed the fact that according to an I-Village survey 52% of married woman don’t feel their husband is the ‘best’ partner they have had in bed and give those kudos to an ex. This same survey also indicated that 80% of woman rated their sex lives as predictable and ‘2/3rds of all married woman would rather read a book, watch a movie or take a nap rather than sleep with their husbands.’

Hello! Is anyone out there listening?

Even with these staggering statistics, only 16% of the woman surveyed in this poll said they were unhappy with their sex lives. Sure, it might not be the ‘best’ and it certainly wouldn’t wake the neighbors but apparently, women don’t care. At least not as much as men.

A New York Times article, along with a David Buss, a leader in the field of evolutionary psychology and author of the book, The Evolution of Desire, admits that men are naturally hardwired for sex, and are genetically driven to seek more partners and sexual experiences than woman do. And this hardwire, may reflect why so many men (70% by some estimates) are unhappy with the sexual relationship they have with their partner.

The question is, are you less than average in the bedroom?

In order to answer, you must know what ‘average’ is. For these answers, we look back to the 2010 Durex Sex Survey. According to the survey, married folks have sex an average of 98 times per year. (This is down from earlier surveys). The New York Times however, says that the average couple has sex an average of 58 times per year. No matter how you look at it, that is not a lot of sex. In fact mathematically speaking, that equals sex 1.7 times per week. For many couples however, the numbers are even more disturbing with around 15% of couples having not had sex in 6 months or more. (Keep in mind, these are ONLY the people that were honest about their sexual behavior)

Worse, on average while people do mostly agree that sex is important, only 44% of all married couples are happy with their sex lives. And, unexpectedly people from North America (including the United States and Canada) are having less gratifying sex, less often than most marital unions in other parts of the world. As much as sex as influenced and infiltrated mainstream North American culture, you would think that we would be the most sexually adept people on the planet. Not so much according to the folks behind Durex.

The survey as a whole sort of paints the picture that the average sex life today is not much to brag about. And what you might not understand is that a good sex life is not about the things that you might first think. For instance, it isn’t about penile size, breast size, body types, or any of the other over sexualized theories about what makes a partner good in bed. Having sex with someone who has the ‘perfect body’ or who knows every move in the sex manuals, or who can go on for hours and hours doesn’t instantly make sex better. Sex doesn’t become poor because a woman has a baby, or because a man is having trouble getting an erection. While these ‘environmental’ factors may play a part in the demise of an average sex life, they aren’t the ‘tell all’ singular reason why a couple is unhappy in the bedroom. Good sex, is about freedom and trust, respect and understanding and mostly about communication. Communication! Women admit to bitching to their girlfriends about how ‘boring’ or robotic their man is in the bedroom. They aren’t ashamed in the confines of a friendship to admit where sex has gone wrong. Men, as well aren’t fooling themselves into believing their wives, who will barely lift her head or open her eyes during sex and is simply waiting for HIS orgasm to end the ‘event’ are the best sex partners they have ever had. Truth is, if you look to your mind, your fantasies it is easy to formulate a plan for an above average sex life. But sadly, few people will ever express their dissatisfaction to their partner. And even fewer will just tell their partner what they want, and how they want it which is truly the easiest way to increase your libido and sexual quality.

If your sex life is below average, or you aren’t happy in your relationship experts suggest that you look beyond the simple characteristics of a good sexual partner, and try to understand what your relationship is lacking. Not what the sex is lacking, but what the relationship is lacking. What would happen if you expressed your dissatisfaction about the quantity or quality of your sex life to your partner? How would your partner react if you told them you were fantasizing about bondage or some other erotic form of a sexual encounter? Truth is, we all have those thoughts, those perversions, those fantasies and yet very few are willing to share them in the confines of a relationship.

So what happens is sucks becomes less than average. A chore. Something on the to-do list that can easily be bumped by any other task. And then the whole thing snowballs, feelings get hurt, sex is compromised and soon, you are in the midst of a below average sex life.

The intent of this article, of the asking whether or not you are less than average in the bedroom isn’t to shed light on your sexual inadequacies. It is simply to open the door to understanding so that you can improve your sex life. Ask yourself how you really feel about your sex life with your partner. Write down an HONEST, open, and completely revealed list of ten things that you would like to see change sexually between you and your partner. Ten things that would make you feel like your sex life is not below average, or average but above average. Have your partner do the same thing. Then swap lists, and see what changes you can make on the fly, throwing your inhibitions, hang-ups, and resentments out the window so the two of you can connect sexually. And remember, if you aren’t going to present ten honest things, there is no point in even trying.

Listen. If your sex life is below average in the bedroom, it isn’t because just ONE of you is doing something wrong. It doesn’t mean you are a crappy lover, or that your partner is going to leave you. It doesn’t mean that your partner is going to cheat. (At least not at first). But, it does mean that the two of you need to take proactive steps (starting now by forwarding this article to your partner) so you can make improvements. Sex is a huge part of life, from the emotional to the physical – and one aspect that is specifically designed for your pleasure and enjoyment. If you aren’t taking advantage of sex in your life and are settling for a below average sexual relationship, you are only cheating yourself.