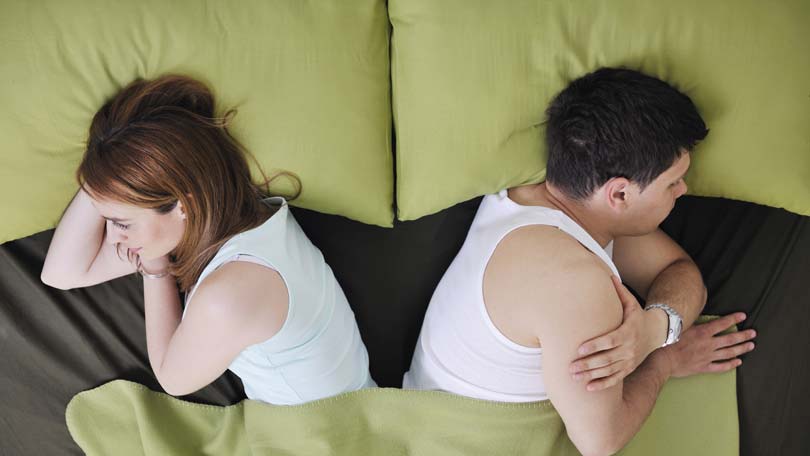 Unfortunately, there is no recommended daily allowance of just how much sex should occur in a relationship. Some people seem to have a high sex drive that keeps their bedroom antics alive several times per week, while others are lucky to get in a quickie once a month. And of course, there are thousands of relationships that are suffering from a lack of sex so long over due, that a deep valley of physical and emotional disconnect has formed that neither partner knows how to bridge. It seems that the longer a relationship goes without sex, the more difficult it is to revive the sex life.

The question is can a relationship survive on a little to no sex?

Many relationship experts believe that a happy and healthy relationship begins and ends with sex. This doesn’t mean that the occasional dry spell, which is very common in relationships especially with life changes signifies that a couple is no longer in love or suitable to be together. But rather that sex is the metaphorical glue that can keep a relationship alive even during the tough times. Psychologist and author, Dr Sharita Shah says, “A physical level of intimacy is only natural and is necessary between a couple, to show a level of comfort and affection. Sexual intimacy is one of the best ways to do it. You may express emotions verbally but nothing says it better than physical intimacy.’

So the longer a couple goes without physical intimacy, the more disconnected that they may feel from one another regardless of the reason why they aren’t having sex. Additionally, according to a sex survey out of 2009 edition of Cosmopolitan magazine, the main reason that men and women cheat is due to a lack of a satisfying sex life in the home. For men especially, sex is often an ego booster and is often directly linked to their self-esteem. In other words, if their partner has a headache every night, or doesn’t seem interested in having sex with them OR they have physical problems of their own that inhibit sex, they can look for ego boosts elsewhere. And this often leads to cheating.

For women, a drastic drop in the frequency of sex comes after childbirth. Often, in the years that follow women do find themselves extremely tired and insecure with their changing bodies to the point that sex doesn’t become a priority. For so many couples this is the time where the sex life dwindles and couples report the least amount of satisfaction with their sex lives.

According to Dr. Phil a sexless relationship is more prevalent in today’s society than we think. Additionally, there is so much pressure from the outside world in regard to sexuality that couples who have problems with physical intimacy often have a hard time reaching out to sex counselors for help, and end up suffering in silence due to shame or guilt. Additionally, he says:

‘There is no magic number that can tell couples how often they should be having sex in order to be “normal.” Instead, he encourages people to discuss their needs openly with their partners and negotiate a relationship that meets both of their needs.’

Having said that, here is what the latest research says about how often Americans are ‘ and aren’t ‘ having sex.

According to the last statistic the lack of libido in the bedroom, may be caused by the stressful lives that so many of us live today, rather than the relationships themselves.

It is very difficult to decide whether a relationship can survive without sex. While love may be the most important part of a relationship, sex is often what fuels passion in a relationship. Without having sex as an outlet and a way to physically connect with our partners, it seems obvious that many other areas of the relationship with suffer as well. There is no doubt that sex is important to both men and women, and helps to strengthen the bond that couples feel toward one another. And yet, it is equally important to make sure that a relationship is not based solely on a sex life, as life shows us that passion and sexuality will be affected by the natural ebb and flow of life.

Still, it’s hard to ignore the fact that one of the most common denominators with people who cheat on their spouses or report unhappiness in a relationship is a lack of a satisfying sex life.

Couples that are dating often overlook the importance of sex in their relationship. Sexual compatibility seems to be circumvented by proclamations of love and adoration. The reality remains that while love may get you through the happy times, sex can get you through the trials and tribulations.