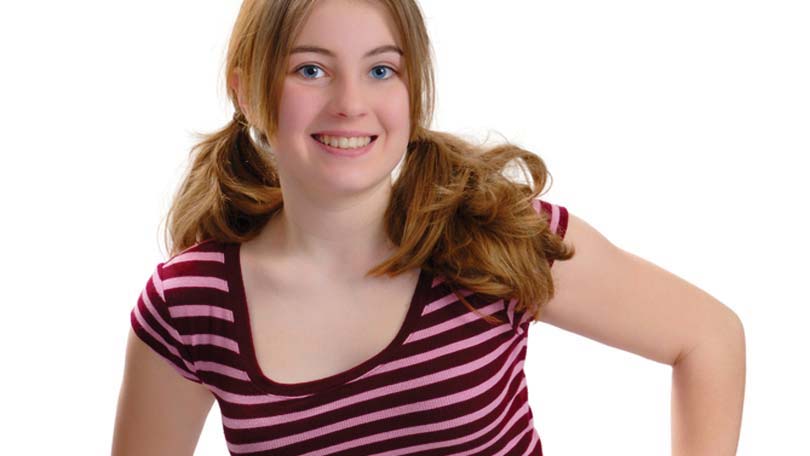 Sometimes the changes in your child as they progress from childhood to teen hood occur almost overnight. One day, all is well with the world and your daughter is happily shopping with you at Wal-Mart and allowing you to help her fix her hair before school. Then, the next day – she stages a protest so dramatic and emotionally charged simply because you want to take her to Wal-Mart instead of Hollister to buy her jeans, that you swear she may have just turned the corner toward crazyhood. And yet, the tears she is shedding over the horror of wearing Wal-Mart jeans to school – or because you won’t allow her to dye her hair blue and green – seem real and relevant in the moment. So much so, that for a moment or two you may question whether you are a good mom, and whether those $85 name brand jeans may just be worth NOT having to listen to her throw a fit.

And to think, you thought that once she passed the terrible two’s you were in the clear when it came to melodrama and psychotic meltdowns for no apparent reason. (Think again!)

Dealing with a teenage drama queen is one of the phases of motherhood. Your teenage daughter who is suddenly charged with zillions of hormones, peer pressure, and the sudden appearance of zits on her face can become so wildly emotional that her mood swings may give you a constant case of whiplash. The key to parenting this little drama queen, is to decide which issues deserve some real attention, and which should just be chalked up to the temporary state of teenage schizophrenia.

According to psychologists, much of the adieu and drama associated with teenage drama queens is actually made worse by parents who indulge in the emotions too quickly. Sure, your daughter suffering a break-up is a pretty harsh life reality to experience. Sure, you hate to see her with a broken heart and would like to do anything to see her smile again. But the more you indulge and the more you cater and coddle her erratic behavior, the more attention she will feel she is getting from you. And, the more she will feel like she can manipulate you into getting what she wants. This is really no different from the tantrums she used to throw in the grocery store because you wouldn’t buy her candy. Whether this method of dealing with life works or not, often comes down to whether or not it works with mom and dad.

This of course doesn’t mean that you shouldn’t be compassionate about the struggles and issues that teens today deal with. You should. But you should also remain steadfastly aware that you are the foundation that she needs in times of trouble. And even though your daughter may think you don’t know squat her life or what she is going through, the truth is she is taking her cues from you on how to handle the pitfalls that are naturally a part of life. So, the more you dote, indulge, and remain attached to the negative – the more she will too. Thus the term and the life lesson to, “Put on your big girl panties and DEAL with it!” Her response to a situation – and her ability (or inability) to deal with said situation, will depend upon whether or not you are empowering your daughter, or enabling your daughter to become a drama queen.

One of the things that all teenage drama queens require in order to be effective is an audience. After all, what fun is a show if no one is there to watch it? Are you going to be an audience for your daughter – and prolong the drama? Or are you going to set your foot down that emotional roller coasters and the lack of self-control in her life are going to be two things that you, as her parent – will refuse to entertain?

Most kids feel misunderstood from time to time. While we may not completely remember what it was like to be a teenage, most of us will agree that things that seem like huge issues in the scheme of things at the time – most often turned out to be little things. Remember how not going to the ‘party of the year’ your junior year actually ensured you were one of the few kids that didn’t get busted for underage drinking? Keep in mind how YOUR ‘cursed’ 11pm curfew as a child kept you out of heaps of trouble. Think back to that asshole of a boyfriend who broke your heart, the one that your parents refused to let you date – the one you swore you were going to run away with in the middle of the night. In retrospect, aren’t you glad your parents were so strict?

One of the biggest mistakes that parents can make is to give into the teenage drama queen. There are plenty of people in this world who seem to eat and sleep on drama alone. These people are generally unhappy and miserable – with a knack for making others miserable as well. Your job as a parent is to make sure that your teenage drama queen realizes that being immersed in drama and over reaction is NOT the most empowered way to live. It is not the viable option for getting what she wants.

So be compassionate for a while. Make sure that as the adult, you never engage in the drama of your teenage daughter. Instead, try to help her see other ways to manage things and view issues from a non-emotional standpoint. Help her to rise above the drama, and encourage her to be her own person. And by all means, be very diligent about putting over zealous drama and irrational behavior in its place BEFORE it gets out of hand. Most importantly, remember that this phase too….shall pass.