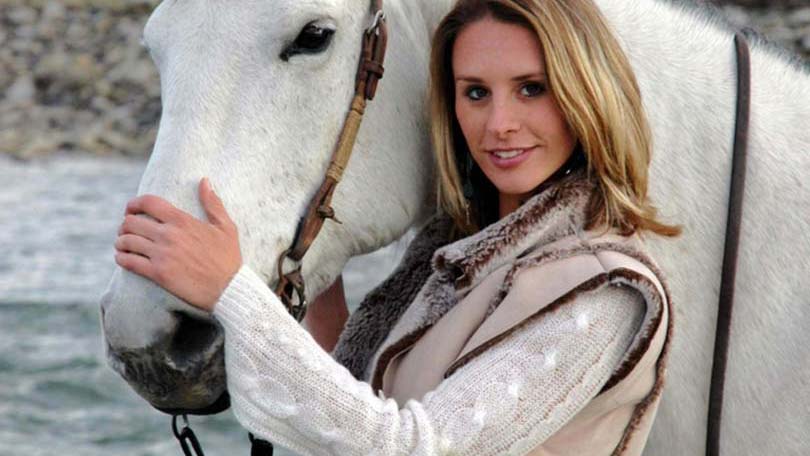 Horses can be broken down into categories, and then breeds within those categories. The categories are as follows.

While there are many more horse breeds in the world, this listing encompasses the most popular breeds within the category.

Arabians. The Arabian horse is native to the Arabian Peninsula and was imported to the United States for the first time in 1725. The Arabian is characterized by his extreme beauty, flowing mane and tail, his connection to humans, and his athleticism. They have a chiseled face with wide set eyes, small, tipped ears, and a teacup muzzle. Arabians have been founding members of many other breeds, and are extremely versatile; able to compete in any division, as well as racing. Visit www.arabianhorses.org for more information.

Appaloosa. The Appaloosa was a breed started by the Native Americans of the Nez Perce tribe in Idaho. They are distinguished by their color patterns, which include irregular spots that can cover the entire body or be barely noticeable at all. Most have what are called blankets, with the colored spots resting on the hindquarters and flank areas. Leopord and snowflake patterns are the other two pattern types. Leopord patterned Appaloosas are spotted throughout the body, and snowflakes are spontaneous spots that are not prevalent. All have underlying pink skin. Most Appaloosas have short, thin manes and tails. The body style of the Appaloosa is similar to that of a Quarter Horse; having a stockier nature. They compete in many western events, and have successfully ventured into the jumping and dressage arenas. See http://www.appaloosa.com

Cleveland Bay. This breed was founded in Yorkshire, and was developed to be a light carriage horse that could transpose into the field to pull the plow. An excellent cross with hunters, the Cleveland Bay is an impressive animal, standing 16.2 hands. Atop his large, round, solid hooves, sits a straight legged body that is bay in color. Visit: http://www.clevelandbay.org/

Hanoverian. Hanoverians were developed in Hanover, Germany as workhorses for field and military. They are also known as German Warmbloods. British King’s out-crossed these “war horses” with their imported Thoroughbred stallions, creating a breed superior in the show jumping and dressage arenas. They have substantial bone, sturdiness, and stamina. hanoverian.org has more information.

Lippizaner. Made famous by the Spanish Riding School in Vienna, these horses were founded by the Archduke Charles of Austria at his stud farm in Lipizza. Lippizaners were bred to be high-quality parade horses, and have amazing grace. They stand between 15 and 16 hands, are compact and muscular. Powerful hindquarters allow them to master the difficult movements of high-level dressage. Most are gray. ( http://www.lipizzan.org/)

Morgan. The Morgan horse can be traced back to one stallion, which was foaled in 1789. Originally intended to be a light workhorse and riding animal, the contemporary Morgan is suited to a variety of disciplines. Combining the blood of the Arabian, Saddlebred and Thoroughbred, the Morgan has the prettiness of the Arab, the elegance of the Saddlebred, and the stamina of the Thoroughbred. They can be of any color, and are usually 14.3 to 15.2 hands. www.morganhorse.com

Quarter Horse. The American Quarter Horse is a foundation breed of the old West. It was intended to be a remarkable cow horse, and has continued that tradition into today. Stocky, sturdy, and athletic, these horses are willing and able competitors in any number of disciplines. Their well-coupled bodies make them ideal for working western events, with the leaner variety competing successfully in show jumping, dressage, and halter. Ranging anywhere from 14.2 to 16 hands, and coming in any color, Quarter Horses are the number one breed in the United States. www.aqha.com

Saddlebred. One of the most elegant breeds is the American Saddlebred. Stemming from the bloodlines of the American Gaited Horse, Thoroughbred, and Narraganset Pacer, the Saddlebred was developed to be a fine saddle horse. Its long, high set neck has an incredible ability to bend at the poll. The wither is well defined, and high above the hip, giving the horse a look that is always up hill. With it’s long legs, well-layed shoulder, and sloping pasterns, the Saddlebred has an incredible ability for high stepping action. www.asha.net

Standardbred. Standardbreds are favorites of the harness racing industry. There are both pacers and trotters, with early registrants into the breed having trot a mile at a standard speed in order to be registered. They are descended of the early American pacing breeds and the Thoroughbred. www.ustrotting.com

Thoroughbred. The Thoroughbred can trace its heritage back to three foundation sires; the Darley Arabian, the Godolphin Arabian, and the Byerly Turk. They were crossed on native English horses, resulting in an animal that could carry weight with great speed over long distances. The integrity of the Thoroughbred blood has been preserved with immaculate record keeping since these early days. The Thoroughbred was the first breed to close its studbook. The animal has amazing soundness, speed, and stamina, and is usually around 16 hands. www.jockeyclub.com

Trakehner. A European Warmblood of East Prussia origin, the breed is known for its temperament. The Trakehner is alert, intelligent, and willing to please. It has incredible movement and endurance, and has been a great asset to dressage competitors as well as show jumpers. americantrakehner.com/

Belgian. This breed is known for its amazing size and traction. The Belgian has a good temperament and is a willing worker. They are usually chestnut with a light colored mane and tail. The largest known horse on earth was a Belgian that weighed 3,400 lbs and was 19.2 hands tall. He died in 1948 at the age of 20. In the United States today, there are more Belgian draft horses than any other draft breed combined. www.ruralheritage.com/brabant/index.htm

clydesdale. In the mid-eighteenth century, the Clydesdale originated in Scotland. They were distinguished as active movers with high quality. They have wonderful markings. Although they come in bay, black, and brown, bay with four matching white socks and blaze are the most common. They have distinctive, silky feathering below the knees and hocks, and are not as bulky as some draft breeds. Most are between 16 and 18 hands, and weigh 1700 to 2000 lbs, although some are known to be larger. http://www.clydesusa.com/

Friesian. The Friesian horse descends from Equus robustus, and had Arabian blood infused in the early 16th and 17th centuries. They have high knee action, small head, and craning neck. This was a valuable war horse, being able to carry great weight but still maneuver quickly and with agility. Friesians began importation to the then future U.S. in 1625. Friesians are always black, with no white markings. They have long, think manes and tails, with flowing hair around the fetlocks. See www.fhana.com

Percheron. This breed was originated in France. Its intended purpose was to pull heavy carts in the cities of England, France, and the United States. They have short, muscular necks, broad chests, and a wide girth. The breed is usually gray or black, with light gaits. Average height is between 14.3 and 16.1 hands. Little is known about the origin of the Percheron, as the French kept no records. They can be shown in hitching, driving, and riding competitions, and have a lively spirit. www.percheronhorse.org

Shire. This is one of the largest horse breeds in the world, standing around 19 hands tall. They are descendents of the Old English Black Horse of medieval times, and originated in the Shires of England. They are gentle natured animals, which weigh over an impressive ton and can pull loads up to five tons. They are strong and massive bodied, but with a surprisingly attractive head and long, feathered legs. They may be bay, black, brown, or gray, and are increasing in popularity with shows being held at many fairs and expos. shirehorse.org/ 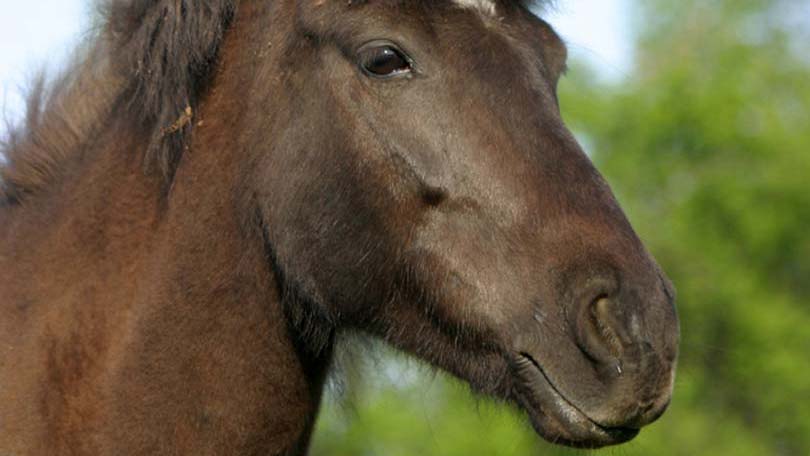 Dealing With an Older Horse 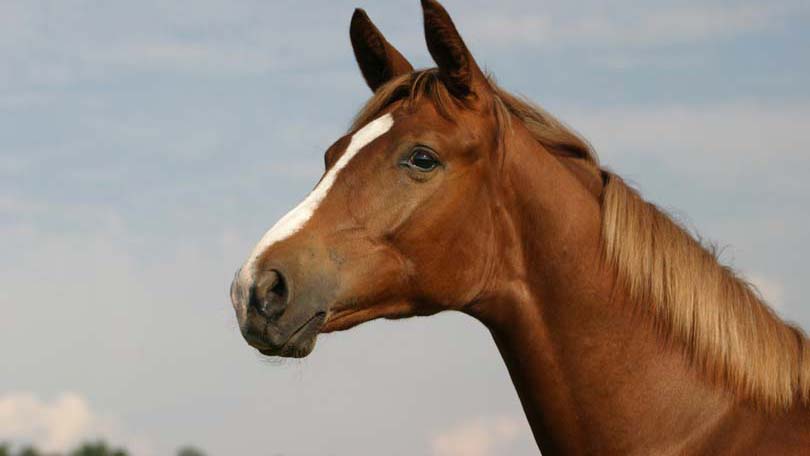 Horses That Bolt – Dealing with a Horse that Runs 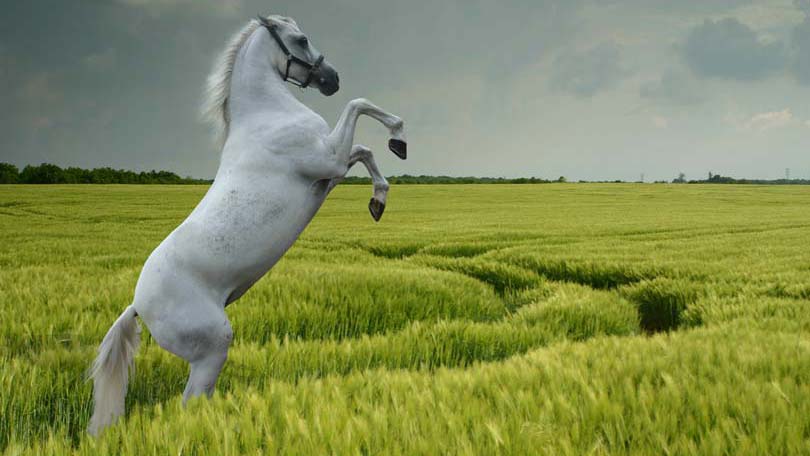 Horses that Buck – How to Stop the Problem 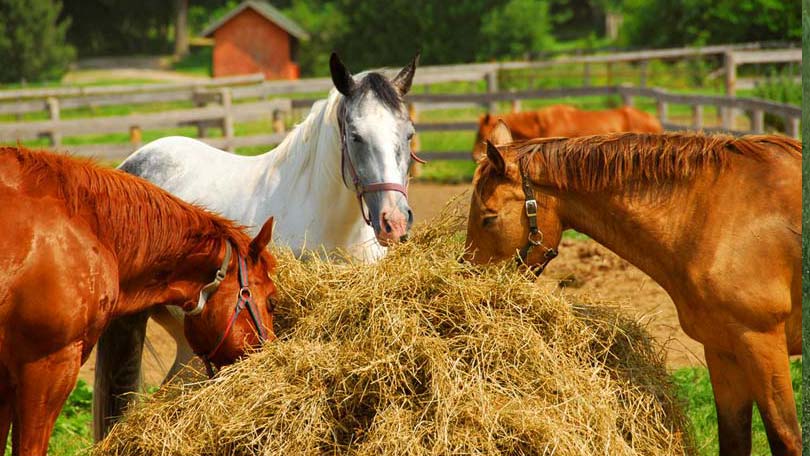 Quarter Horses – The Most Popular Equine Breed in America