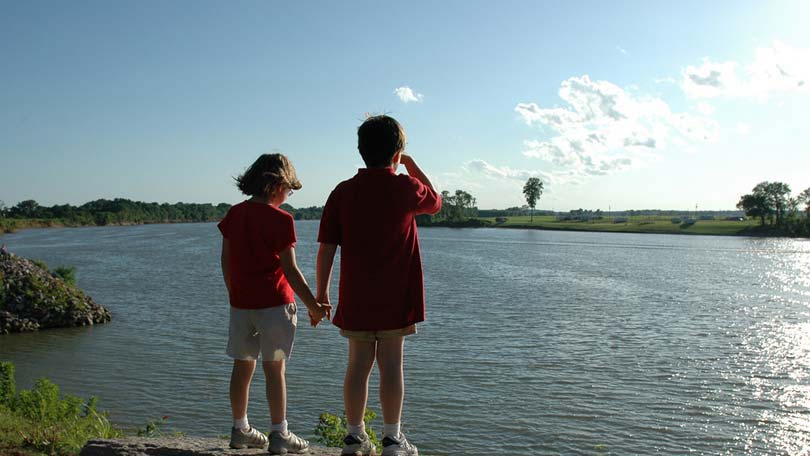 It’s an age old problem. An older sibling who bullies his or her younger siblings. Even if they aren’t bigger, the oldest child almost always thinks they’re justified in their tyrannical behavior towards their little brothers and sisters. So, is it ever okay for a younger sibling to fight back? Or, should you always intervene any and every time your kids fight with one another. Maybe, just maybe, you should let your younger children stand up to your oldest child and put them back in their place as just one of the kids.

I remember having a terrible time with my older brother growing up. He is a mere nineteen months older than me, but he seemed to think he was more like nineteen years my senior. Not only did he think he was far superior to me in every way, based solely on our birth order, but he also maintained a bossy and stubborn personality in general. To make matters worse, he’s one of those rule-following, regimented, ‘old soul’ types, so he was basically born an adult! I, on the other hand, am wild-hearted and free-spirited, and my personality clashed terribly with my older brother’s as we grew up under the same roof.

I can’t really remember a peaceful period in our relationship. It wasn’t until we both married our respective spouses and he and his family moved approximately 1200 miles away that we finally became civil towards one another. We’re connected on social media, but rarely talk or visit with one another, and when we do, we work hard to keep things pretty formal and amicable. Now, my little brother? He and I are thick as thieves and always have been. I don’t recall ever lording over him, because he and I share a very similar personality. So, that begs the question. Does sibling rivalry have everything to do with birth order, or is it purely a result of clashing personalities?

I’m sure sibling rivalry is a combination of both factors. In fact, I’m sure many other factors come into play as well. And, I’m also sure it’s totally normal. Like any relationship between two or more people, there are going to be awkward times of tension, or stormy moments of conflict. Such is life. But, when is enough enough? When is it okay for a sibling to fight back against a bully of an older brother or sister?

I think part of the problem with the older sibling/younger sibling relationship is that parents tend to give the oldest child a lot of responsibility for and authority over their younger children. The oldest sibling is usually appointed as a ‘third parent’ and is commissioned to do such things as clean up after their siblings, babysit them once he or she is old enough, and show them how to do things, like tie their shoes, or ride their bike without training wheels. This causes the oldest child to cultivate leadership qualities and a sense of responsibility that his or her younger siblings may never develop having been coddled and pandered to by their big bro or sis.

The problem lies in the fact that many first-born children do not wish to assist their parents in such a way, and as a result, become very resentful of the younger kids. And the younger kids usually resent the oldest child for bossing them around and exploiting their first-born status to their advantage. Parents rarely realize (or care) that they’re fostering any ill-will between their children with this arrangement, because they’re usually just happy to have the extra help from their eldest child. Perhaps having all that free labor is why the first born is usually rewarded as the primary heir of his or her parents’ inheritance!

I think there are appropriate times for a younger sibling to exact revenge on an older sibling when he or she has taken his position in the family too far. I remember taking great pleasure in hanging around with my older brother’s friends in our tween and teen years and drawing their attention away from him. It drove him crazy and was one of the few ways I could get back at his usually unflappable self. Another time, I threw a punch at him because he’d pushed me too far with his tyranny and I couldn’t take another minute of it! I don’t think my behavior was excusable, but at the time, it certainly felt good to unleash sixteen years of brewing animosity towards my brother in a physical show of aggression.

Now that I have children of my own, I see this age old problem of sibling rivalry playing out before my eyes. I have three daughters, and no sons, but my oldest one is definitely brash and bossy! Mind you, she’s a good three-and-a-half years older than my middle daughter, so I believe her ‘leadership’ qualities towards her younger sibs to be slightly more justifiable than my brother’s were towards me. And, there are times when she pushes the littles too far and I let things play out as they will without interfering. But, my youngest daughter in particular could do a lot of damage if I didn’t step in and call time on her version of revenge. She’s a kicker, and though she be small, she be mighty, and I don’t thinking kicking others is acceptable.

I think parents do need to be vigilant about fostering the qualities of first-born children without allowing them to become oppressive to their little brothers and sisters. First and foremost, we have to lead by example. If we’re unjustly harsh to our eldest, They’ll be that way to their siblings. And likewise, we need to nurture a healthy amount of assertiveness and self-preservation in our younger kids without them becoming insufferable, paranoid, and overly-vigilant.

I’m holding onto the hope that one day, when my children are grown, that they too can be civil to one another as my older brother and I now are. Even more, I hope they outgrow their sibling rivalry altogether and become great friends! I know my oldest daughter will always maintain a sense of authority over the little ones, and I hope I’m giving the littles the tools to stand up for themselves if their sister, or anyone else in their lives, over-estimates his or her right to rule over them. In the meantime, I’ll keep breaking up their fights. Well, most of them anyway.