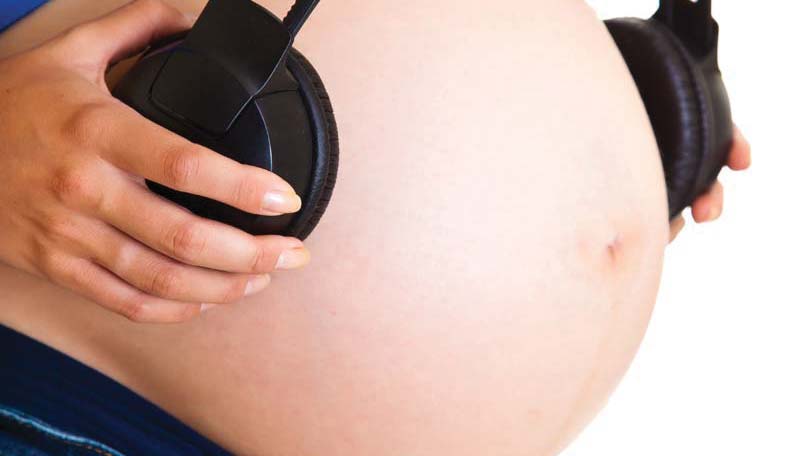 Parents to be love the idea of interacting with their unborn child, and in the last decade, it has become extremely common to see parents playing music to their unborn baby. Perhaps they are trying to get an early hand in swaying their child to fall in love with grass roots country or rock and roll music. Or maybe they are betting on the fact that while research hasnt proved music in the womb to be beneficial, it has not proven the opposite either. And the truth is that a fetus can hear from the time they are 20 weeks old though hearing is not complete until late in the third trimester.

Developmental scientists have been able to adequately prove that upon birth, newborns do recognize the voices of the people that have been around them in utero. Additionally, babies that have exposed to sounds like a barking dog during pregnancy were less likely to cry or be startled by them after birth. Essentially, an unborn baby can find comfort in the sounds around them while they are in the uterus.

So what harm is there in sharing a little Bon Jovi, or Cher?

Even more interesting is the fact that in a study of 150 newborns, physicians found signs that even a month after birth, newborns showed signs of recognizing and remembering music that was played to them while they were in mama’s belly. In this study, researchers played music for 15 minutes per day on a daily basis, three weeks before the mother was set to deliver. After delivery, the music was not played. When the infants reached one month of age, they were brought back in and played the same melodies that they heard in utero. Compared to ‘new’ music, researchers found that the babies’ heartbeats slowed immediately upon hearing the songs played to them in the womb.

The study however did not prove that the music was beneficial. In fact, they concluded that babies around the 32 week of pregnancy (when cochlea development is complete) are privy to hearing all of the sounds of the postnatal environment. And that adding more, especially with the use of headphones directly on the stomach is not developmentally necessary for any reason. Physicians seemed to agree that babies in the womb exposed to too much music, for too long, or that is played too loud can actually damage the inner ear development that occurs after birth. And up until a baby is around 28 weeks gestation, music applied directly to the stomach can actually be detrimental to ear development. The key may be in balance, and in choosing specific times and gentle music at low frequencies to play to your baby.

Yet another study performed by Thomas R. Verny and Rene Van de Carr who are renowned early child development researchers used ultra sound and fiber optic technology to study the responses of babies while listening to music in the womb. They did find that babies who were stimulated in-utero, seemed to have exhibit advanced visual, auditory, language, and motor development skills later in life. They also concluded that the music seemed to calm the babies in the womb and enabled them to sleep better before and after delivery.

With so much research, and findings so different parents-to-be can be easily confused about what is the right thing to do. The bottom line is that you should stimulate your unborn baby in the ways that you feel comfortable doing so. If you believe that playing your baby Mozart in the womb is a good way to give them a jump-start in life then you should follow your own judgment. The risk involved in playing music to your unborn baby only comes into play if you play the music too loud, or for too long. In other words, acquaint them to your favorite Metallica CD with the volume turned down, rather than by attending a concert or thumping the base in your living room.

All mothers know that their baby can hear. This is evident any time a pregnant woman is exposed to a very loud noise or startling sound because it many circumstances the baby will jump or flinch in the womb. An important part of bonding with your baby and the pregnancy is not just talking, singing, or humming to your baby but through gentle pressure and vibrations on your stomach as well. When you are in the last trimester and can see your baby flailing around, they can certainly feel your touch and hear your voice, and amazingly often respond to it. Ask any pregnant woman and she will tell you that unborn babies respond to sounds and touch just as obviously as they will to your eating a spicy bean burrito.

Pregnancy is a special time, not just in your life but in your child’s life as well. While science, research and medicine is highly advanced the world that all of us live in before birth is still very much a mystery. There will be no way for researchers to tell us everything about how a baby feels, how advanced their emotions are or what part exactly the prenatal experience plays in a child’s life. As a parent, it is never too soon to start showing your baby just how much they are loved or to expose them to all the beautiful things in the world.

Blame it On Baby Brain