Snoring and the Marital Bed – It Can Ruin a Marriage 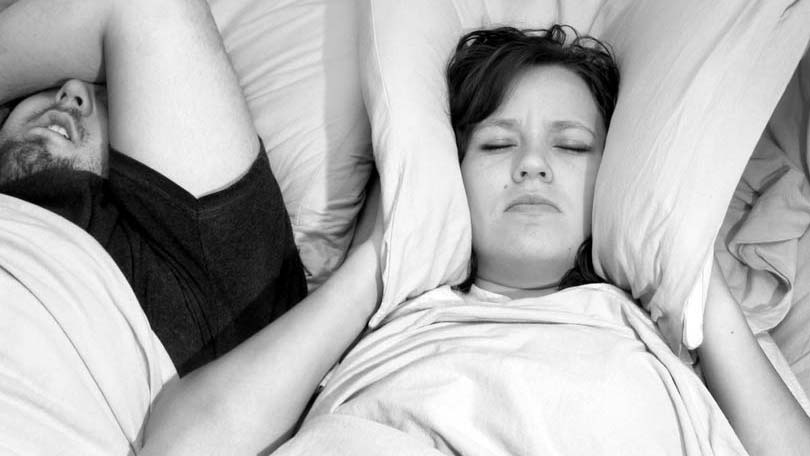 You go to bed. And then you are awoken, or unable to sleep because the person next to you is snoring. So you nudge. And you kick. You might even pinch their nose closed for a few minutes to try and shake them out of their snoring fit. For a moment, it subsides and as sleep begins to find you, you are awoken again. Living with someone who snores can be an annoying thing. But when it comes to snoring and the marital bed, there is a massive link that shows it can be harmful, if not deadly to your marriage. Why? Because most people are forced to simply move to another place to sleep. And night after night, week and month and year after week and month and year the couple starts to detach and intimacy flails between the couple.

A study at The Sleep Disorders Center at Rush University Medical Center conducted a scientific study to evaluate how a snoring husband can affect marital satisfaction. They found that couples where one partner suffers with sleep apnea or snoring issues, have a much higher divorce rate than those that do not. The Married Couples Sleep Study found that married couples in this situation have a high rate of marital dissatisfaction and a reduced quality of life. Blame it on the lack of sleep and the stress that ensues, or the lack of intimacy that results from couples not sleeping together. Truth is that people with snoring issues, and those that live with them often find themselves angry and resentful toward one another.

Unfortunately, many couples believe that a snoring issue is similar to a health issue, and one that they don’t have control over. So while they complain, they perceive it as a condition of marriage. But is this a condition that a couple can live with happily? Experts and studies seem to say NO!

Another problem is that sleep apnea and snoring issues, are often related to manageable health problems. They are often attributed to being overweight, drinking too much, or even tobacco addictions. There are of course, hundreds of other health issues that can result in a snoring. But since many of them are preventable issues, the couple often has an underlying sense of resentment and anger about the snoring. The non snoring partner may wonder why their spouse cannot just lose weight, or quit drinking. After all, if it results in snoring that is disrupting the marital bed, it should be important to them.

And, the snoring becomes an underlying stress inducer in the marriage. Often the person who snores, also feels helpless to controlling the snoring in any capacity, so they don’t recognize the importance and significance of the problem that their snoring causes for their spouse.

According to statistics around 40% of adults over the age of 30 snores. The problems associated with snoring, especially as they pertain to marriage are likely massive and yet understated because people feel so helpless about the issue. In the end, it comes down to one thing for couples. Finding a way to get good nights sleep that leaves them rested. And more often than not, after trying ear plugs and sleepless nights nudging their partner the solution is to find another, quieter place to sleep.

So what can be done about the snoring problem?

The first thing to realize is that snoring, regardless of the causes CAN BE a health issue. If your spouse snores, they probably don’t know it, but should see a doctor and sign up to have a sleep study done. They also should try to lose weight and follow some of the more organic advice about learning how to snore less. In other words, trying to use night strips on their nose, taking medications, changing their sleep positioning and avoiding certain foods that can lead to snoring should be a first line of defense. In more than half of all the adults that snore excessively at night, sleep apnea, a dangerous sleep disorder, is diagnosed during a sleep study. Most often, patients are given masks to help them sleep at night that provide them with an oxygen supply.

Additionally, couples should do everything in their power to AVOID coming to the often unspoken solution of sleeping separately. Use ear plugs, or utilize devices that will provide background noise so that the snoring will be drowned out. These efforts can prove enough for many couples, but don’t work for all. And, psychologists also believe that couples should see the snoring issue as one that can be solved, and shouldn’t ignore the detrimental affects snoring has on both the health of the couple and the health of the relationship.

The Couples Sleep Study at Rush Medical Center found that snoring is the thirdly recognized medical reason that couples file for divorce. This speaks volumes for just how damaging ignoring snoring can be in your marriage. It may be funny to talk about, but the truth is the anger and resentment you feel in the middle of the night when you cannot sleep because your partner is snoring, is anything but funny. Instead of living with it, persuade your partner to get some help so that both of you can find a way to get the peaceful slumber that you need.