The History of Candy Canes 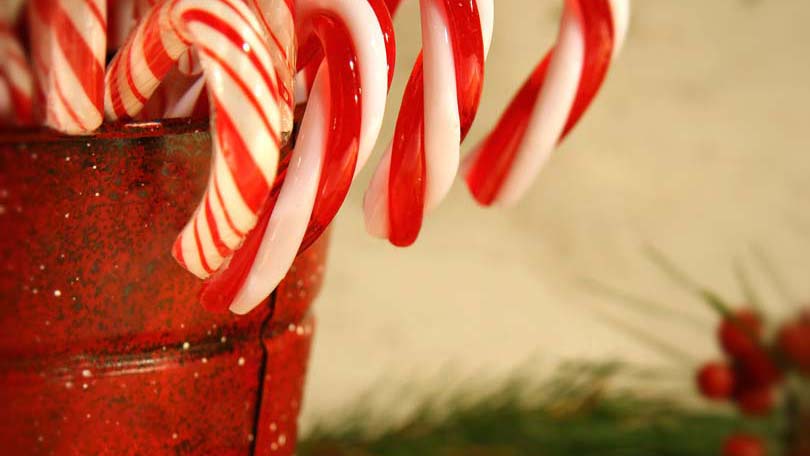 It is one of the universal symbols of Christmastime. Although I’m not entirely convinced that children are really thrilled with the taste of a candy cane, their special nature makes them irresistible. Their unique shape makes them perfect for decorating Christmas trees, and their mint flavor makes them more of a breath freshener than an actual candy, but kids gobble them up nonetheless.

Europeans claim to be the first to bring Christmas trees in from outside and decorating them. The decorations were modest by today’s quality standards but they served their purpose well. Simple decorations were fashioned from candy and fruits and small decorative trinkets that could be balanced on the tree branches. Candles were added to light up the tree during the long dark cold nights. Of course, this could easily result in the loss of home, property, and life.

The original candy cane was a straight peppermint stick that could be balanced in the tree branches as an exclusive Christmas tree decoration. They were of course unwrapped at that time, and often the flames from the candles assisted a melting process, but they were used just the same.

The first actual candy cane arrived at a pageant in Europe, of all places. The pageant used live crèches, as in living mangers and animals and whatnot. As part of one of these pageants, the choirmaster had bent the original peppermint stick into a hook shape in an effort to resemble the shepherds’ crooks. He passed these out to the children who attended the pageant, sort of like a trinket gift. The absolute usefulness of this shape caught on quite quickly, and over the period of numerous years, the peppermint stick was eventually fashioned primarily with the crook shape around Christmastime.

However, unlike the candy canes of today, the peppermint was a white stick. They did not receive their tell tale stripe until much later. The original candy cane that hit the pageant circuit came about in approximately 1670 while the candy received its red stripe around 1900 or so.

In the 1800’s the candy cane, the decorated Christmas tree, and the eventual red stripe made its way to the newly born United States. Despite an attempted ban on the holiday, the candy cane grew in popularity when it was held upside down to resemble the letter “J” for Jesus.

Beyond that, the crook shape was said to resemble the figurative crook that Jesus used to watch over his “flock” of people. Of course this increased the popularity of the Christmas candy. Jesus had reportedly used hyssop as a purifier and a blessing. Hyssop is a member of the mint family.

When the red stripe appeared on the candy, it was stated that this could very well represent the blood spilled by Jesus at the hands of the Roman soldiers, and those with the three thin stripes were representative of the Holy Trinity. The white was supposed to state Jesus’ purity and the innocence of his virginal birth.

These associations created a religious symbolic backdrop for the holiday candy that led to the overall acceptance of the tradition. Of course these theories have been put to great scrutiny over the years by skeptics, atheists, and others who believe that the candy is simply a candy. In this day and age, I suppose it’s up to each individual to determine whether or not they believe that the candy holds any religious value or is simply a decoration that we have come to know and love in celebration of the holiday season.

Either way, the candy cane is now a traditional symbol of the Christmas holiday, passed out to children and adults to spread joy and holiday cheer. Over time the peppermint stick has undergone some transformations and is now available in different shapes, colors, and flavors. The red and white peppermint hook, however, still remains the classic favorite among candy canes.