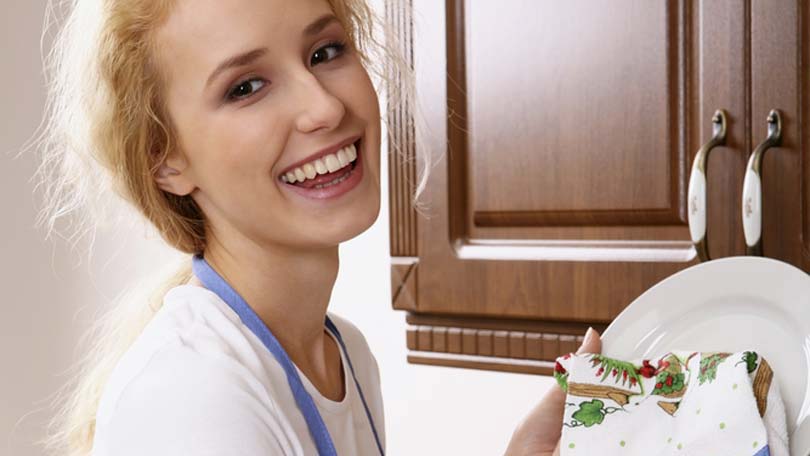 To date, there have been numerous reports about how housework, i.e. washing dishes, and vacuuming as some form of therapy. In fact, there have been numerous wack-job female celebrities (no offense, but they did sell the rest of us out) who have been quoted to say that housework is therapeutic for them. Sure, there is nothing wrong with a clean house  but despite all the reports and pre-conceived gender roles that seem to drive the point of ‘a woman’s place is in the home,’ home it is nothing but a tangled web of lies. Washing dishes is NOT therapy. Neither is dusting, or changing diapers or vacuuming or sweeping the kitchen floor for the umpteenth time in one day.

You have to wonder if the whole housecleaning therapy link wasn’t conjured up by a group of men, who upon finishing a round of Saturday afternoon golf, were simply trying to ease their guilt of leaving the wife at home to tend to the kids, the cooking and cleaning while he finished off a Bud Light.

‘I’ve discovered the therapy of cleaning. I used to be retarded domestically but now I understand that if you put your house in order, it gets your head in order as well. I know all about (cleaning product) Cillit Bang, which I use on the cooker.’ ‘

Well, Bonham no offense but we think that you are STILL retarded domestically speaking. And chances are that very few ‘real’ women actually know what Cillit Bang cleaning products are or can afford them? Do they come with a maid attached?

‘cleaning is the best thing for the human mind and body. Seeing all the dirt being sucked up is an instant gratification!’

And of course, winning the lottery is also a form of instant gratification.

All this cleaning as therapy replacement talk is sort of outdated. And while it is easy to agree that having a clean and organized house definitely helps to keep you void of environmental chaos, the truth is that it is NOT just woman’s work. For years, men have credited things like ‘tweaking the Harley,’ or ‘rebuilding their dad’s old truck,’ or even baling hay as a form of therapy for them. The difference is that these things involve an interest, or a hobby, or even money as a form of payment. Housework does not.

Interestingly, several reports have been done to try and estimate what a homemaker’s monetary worth is each and every year. The conclusion for a woman with a husband and one kid living in a modest size house is that her services would be worth a whopping $96,000 per year if she performed the same duties outside of the home. Obviously, if someone was going to pay you that much money for all the time and effort you put into your housecleaning, it would be therapy. Money therapy, which could lead to retail therapy and much, much less stress. But sadly, no government has of yet decided to pay the dedicated individuals who see house cleaning and raising children as a fundamental duty of living a responsible life.

So again, let’s reiterate! Washing dishes is NOT therapy!

Decade ago, when a woman’s place truly was in the home a clean and tidy home, with a sink void of dishes was a measure of a successful wife and mother. Look back to June Cleaver or even your grandmother. Her days were spent endlessly toiling to take care of the laundry, the mending, the cooking, and the cleaning. Her family was fed, and she was the one left to do the dishes. During the depression, when people could not afford many of the niceties that life today offers making a home comfortable and cozy, and decorated were perhaps form of therapy. And even more telling is that back in those days, people spent four times more time in their home than they do right now. Today’s lifestyle is so hectic that people hardly live in their homes which makes taking care of them and keeping the dishes washed a chore in and of itself.

As difficult as it can be to admit, there are those moments when having a nice, clean and kept home really does sort of settle the soul. These attributes definitely make coming home easier, and more relaxing. But the duties should fall on every single person in the home, not just the female. Men, women, and children should all take responsibility for their living spaces and for the upkeep that it takes to live in a clean environment. Hosting a family cleaning day, or spring cleaning or reorganizing closets can definitely make you feel better as long as you are not forced to do it, or expected to do it, every single day of the year.

Truth is, even Cinderella upgraded. She sang while she worked because she had no choice. But as soon as the prince came along, she upgraded to a huge castle that likely came complete with servants and maids!

And if that doesn’t convince you that housework is not a form of therapy, a 2002 depression study out of the University of Harvard will. (Because those folks know their stuff). The study used a depression monitor which showed that while exercise and other forms of physical work actually boosted people’s moods housework had the opposite effect on participants. The study done again in 2008 with more clarity showed that around 20 minutes of housework per day was beneficial to the mood and depression symptoms but housework done for any longer period of time than 20 minutes proved to decrease mood and increase depression. So, if you have to clean or wash dishes or vacuum set a timer and please, for your health’s sake don’t clean more than 20 minutes per day!