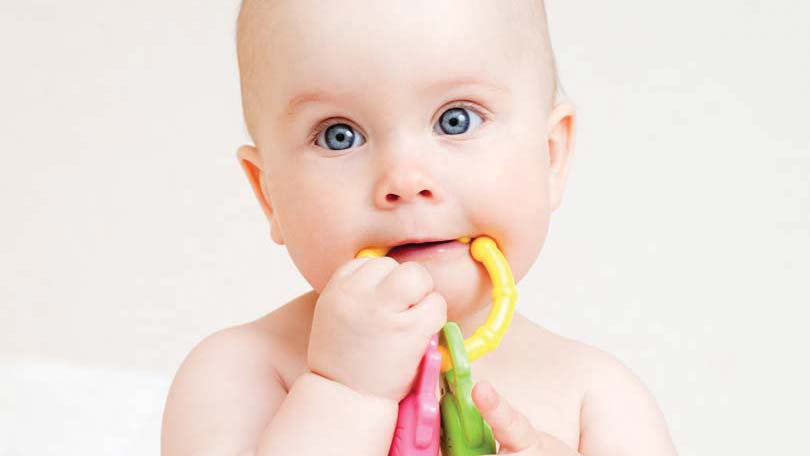 Parents are always on the alert for special milestones in the new baby’s life. Even if they have had children before, there is something special about each and every milestone a child reaches. When do babies start teething is a question that every new parent wants to know, because they are joyously anticipating the milestone just as much as they are worried about facing sleepless nights and teething pain not long after they finally got their little one to snooze through the night.

The simple and basic answer to when do babies start teething is they teeth when their body tells them it is time. Not all children cut canine at the same time, and there is not an accurate predictor that can tell a parent that the fussiness their child is going through is absolutely teething fussiness.

Most children gain their first tooth between the ages of six months and nine months. It has happened in some children that the first pearly white didn’t break through until ten or eleven months, but the majority start cutting an incisor around six months or so. Some children will cut earlier than that, even as early as four months, but it is rare.

The first tooth a child usually shows is one of the top two middle teeth, although a few unique souls decide to bring forth one of the bottom middle teeth instead. Once that process has begun it is almost always certain that the first two middle front and the first two middle bottom will make an appearance before any other teeth. Every now and then you have a child that sprouts teeth without a pattern, but it is very rare. Usually by the time a baby has reached between 7 and 10 months, they are sporting 4 brand new front teeth.

The next in line for most children are the first set of molars. These are the front molars as the second set needs more space and the child needs to grow before there is ample room in the mouth for two sets of molars. The first molars can pop up between 10 and 14 months, on average, and you can always give or take a couple of months when it comes to when babies start teething. The second set of molars tends to begin to pop through around the second or third year. Of course the third set, the wisdom teeth, usually begin to show between ages 13 and 18, and in some cases well into adulthood.

By the time most babies are a year and a half, they at least begin to cut their fangs, also known as the canine teeth. Many children already have a full set of dentist inspect-able teeth by the time they reach eighteen months. If your child is developing teeth is a rare fashion, out of order, or they seem to be coming in crooked, most cases will work themselves out as the child grows. It is not uncommon for children to have a full set of teeth crammed into a tiny mouth that can’t hold them all, thus the parent believes there are orthodontist bills in the near future. This is not always the case and many children outgrow any initial tooth distress, however, by the age of two a child should have most of their teeth and there should be some evidence that they are straightening, otherwise a visit to the dentist is a good idea.

A visit to the dentist should happen anyway between the age of eighteen months to two and a half years, leaning on the earlier side of the scale for babies who were bottle fed or who fell asleep with the bottle or breast after their first couple months of life. An early life visit with the dentist can help rule out future problems or catch problems while they are still affordable to fix.

When babies are teething they are usually a bit uncomfortable. Anyone who has ever had a wisdom tooth grow in should be able to associate with the discomfort. Most babies are a bit fussy, may have diarrhea (although not all physicians contribute this to teething) run a low grade fever, and have difficulty sleeping through the night. The baby may like to chew, mouth, and may even pull at their face in an attempt to get rid of the discomfort. The first four teeth are the most uncomfortable, as well as the most obvious.

Comforting teething babies is really about meeting their needs to the best of your ability and supporting them through the process. While topical medications as well as children’s Tylenol can alleviate symptoms for a period of time, it is not something that should be repeatedly used. Teething rings, frozen waffles, and other safe and handy chewing items can help alleviate the discomfort as well as assist the stubborn tooth in breaking through the gum line.

A physician should be called when diarrhea lasts for more than two or three bowel movements as well as when the baby develops a mid to high grade fever, or if the fussiness is excessive. It can be natural to assume a baby is teething when they display signs of mild illness around the appropriate age. Rubbing your finger along their gums can often answer the question as to when a baby starts teething.

Some babies will go through teething like little champs and never even fuss while others will cry every ten minutes. Just as adults can be sensitive to mouth pain while others barely notice a dental visits, children have their own unique tolerances as well.