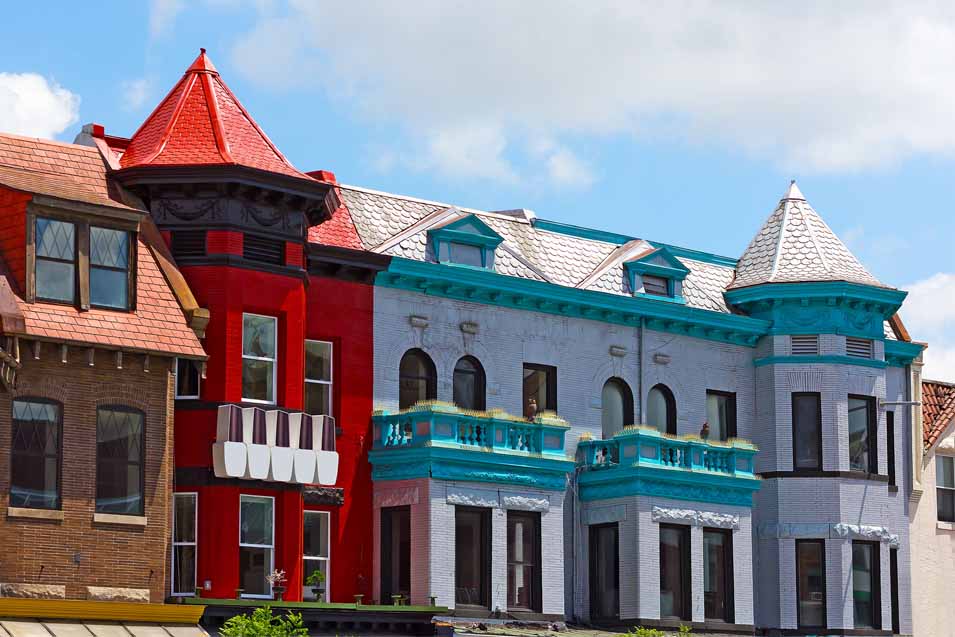 Adams Morgan is a neighborhood in Dc that is known for its public art, and colorful buildings. The community is within walking distance of DuPont Circle and downtown Washington, where residents enjoy theatre performances, museums, and rich history.

Adams Morgan, in a multicultural neighborhood centered on a hopping nightlife scene. The brick row homes in the area are brightly painted, some featuring eccentric murals. The community is also home to independent bookstores, vintage clothing shops, and artisan cafes.

The area originally developed as an urban district and expanded with the construction of two streetcar lines. Before being named Adams Morgan, the are was known as Lanier Heights and quickly became a popular, middle-class community. The name Adams Morgan was adopted in the 1950s -1960s after the decline od the second World War and racial tensions. The name combines two area schools, John Quincy Adams, which was a predominantly white attended school, and Thomas P. Morgan, which was mostly attended by black students.  Since the 1970s, Adams Morgan has continued to increase in population and businesses. Making it a desirable place to live.

The personality of the neighborhoods is rooted in its history. Today, Adams Morgan is known for it’s eclectic and diverse personality, which welcomes artists of many different backgrounds to visit and find inspiration. It’s an exciting neighborhood with a variety of interests for everyone.

Adams Morgan is famous for its variety of people and culture, which allows residents and visitors to enjoy diverse restaurants, bars, music and art. There is a real sense of community in the neighborhood of Adams Morgan. Residents also enjoy the different nature and beauty around the area from the nearby parks, such as Rock Creek Park, Meridian Hill Park and Kalorama Park.

The neighborhood cannot be beaten as a hot spot for touring and getting a drink with friends. Some of the cultural attractions you’ll find in Adams Morgan include Sitar Center for the Arts, DC Arts Center, and the Adams Morgan Heritage Trail. The community does like to showcase talented artists from painting, photography, music and theatre. It’s a great place for new and old artists to practice their talent.

Artists seem to love the Adams Morgan neighborhood because of its rich history, diverse culture, and colorful atmosphere. It’s a neighborhood where artists can find inspiration from the buildings, people, and nature it’s surrounded by.  Adams Morgan is also a neighborhood that supports the arts and upcoming artists.

Being a Good Renter – What to Think About

Escrow – Protection for Everyone

Preparing Your Kids for High School

There is More to Life than Money – Is Money Controlling You